Just a month after celebrating its first year in its new Crofton, Md. office, The Cyphers Agency was proud to see it featured in Baltimore Business Journal’s “Cool Digs.” 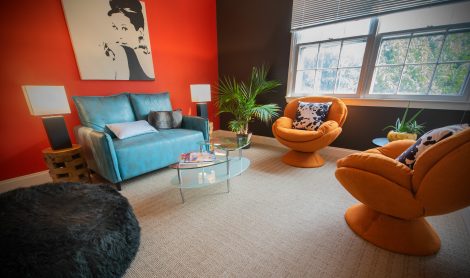 The article, Cool Digs: At Cyphers Agency’s homey office, each employee gets a decorating budget, highlighted what makes the office truly feel like home, from its residential location to the personal decor chosen by its employees.

It also included a slideshow with six images of the office, as well as the following commentary:

“It’s actually hard to believe that we’ve only been here a year,” Darren Easton, vice president and creative director, said in an email. “After observing a year’s worth of team interactions, from agency-wide brainstorms to the impromptu one-on-one exchanges of ideas that occur every day, it’s clear everyone feels at home.”

The two breakout rooms used for team collaboration are named “Purple Rain” and “Audrey” for their wall color and decor — a large image of actress Audrey Hepburn hangs on the wall of one of the rooms. These spaces are a favorite of employees “due to the privacy they provide and internal brainstorming they foster,” said Steven Adams, public relations coordinator at the company. Cyphers Agency also has an upstairs lounge for employees used daily for a “real-time social media strategy meeting,” as well as events and sometimes a game or two of cornhole. There are also a total of 67 plants throughout the office, most of which are real, Adams said.